While working on my Star Wars Celebration Anaheim print, I created several pieces to practice and study various elements of the final painting. I was asked if I could post some of those studies and explain my process a little.

First is the concept stage. I worked out several thumbnail sketches to figure out the story I wanted to tell. Once I had that, I worked out the perspective and how I wanted the characters arranged in the composition. I took photos of my assistant dressed as a Jedi (using some robes I borrowed from an old high school friend) for reference. Small USB laptop lights were used to try and create the glow from the Control Crystal. Using all this I created this concept sketch (above) I finally turned in to Lucasfilm for approval.

Once I got word that the concept was approved for Star Wars Celebration Anaheim, I had to work out some issues. Mainly the fact that I choose to paint an image that takes place after Star Wars Episode VI (Return of the Jedi) and good reference for the actors likeness after the film came out was very limited. I did find some Episode V (The Empire Strikes Back) behind the scenes photos of Carrie Fischer that had her head at the right angle, but the lighting was wrong and it was in black and white. Using that image as reference, I studied Leia’s face and how light shaped it. I also did some sketches of Luke (with beard, without beard, various hair styles, etc) to study how he should be rendered.

Oils is my favorite medium to work in. However, most of my clients hire me to work in watercolors or digital mediums. So any chance I have to work in oils, I tend to jump at. It had been several months since I last used oil paints, so with my sketch studies in hand, I oil painted two color and technique studies on 9×13, 3/4 inch thick birch to flex my creative muscles so-to-speak.

The Luke Skywalker piece was a likeness study. I felt Luke looked too young in my beardless sketch study. While I liked how he looked in other studies with a beard, I decided that beardless would help establish this scene as right after the events of Episode VI and would lessen the issue of lack of good reference the longer time went on. I worked on trying to make Luke slightly more muscular and heavier as well as older than he appeared in the previous study. I also played with a technique using thin paints and a palette knife to create the texture of the tree bark. I really liked the bark technique but ended up abandoning it as the details lessened the depth effect in the final painting.

Princess Leia was the most difficult study in this project. In particular, I had read about an oil painting technique devised by Leonardo Di Vinci called “Sfumato” that I had never tried before and I figured, I should try it out. Keep in mind that it took Di Vinci years to paint using this technique. I had two months. Probably not the best idea on my part. Another issue was my reference was in black and white, and there was no good reference of Carrie Fischer staring into a light. In the end I used about 15 layers of very thin paint on the Leia study. Creating a lighting effect using optically mixed colors. Always one to multitask, I also took this opportunity to practice how the trees should be painted.

In the end, both color studies helped me lock down some issues I was having and significantly improved the final piece. Even though neither study actually looks like what I finally painted, I was able to learn the angles of the faces and create more realistic lighting as well as practice techniques I would use rendering the background. The final painting has dozens of layers of paint. The underpainting is a heavy green like the studies but using the Sfumato technique, I applied very thin layers of medium and glazes every day for 2 months to created an optical blue and amazing depth. Sadly, the camera does not capture this effect so you’ll just have to stop by my booth and see it for yourself.

I chose the name “Apprentice Leia” as a play on her title, “Princess Leia”, and always loved the idea of Princess Leia becoming as strong of a Jedi as her brother, Luke Skywalker. I was also disappointed that she never got to meet Obi-Wan and Yoda (at least as an adult). With those thoughts in mind, I was inspired to paint this image of Leia as Luke’s Jedi Apprentice on Dagobah, assembling a lightsaber very similar to her master’s. Yoda’s Force Ghost observes her and provides motivation and wisdom much as he did for Luke. In the background, Luke consults with the Force Ghost of Obi-Wan Kenobi on the next stages of Leia’s training.

The original painting is 36×25 inches and was painted using Holbein Oil Paints on Birch. Pending approval from Lucasfilm the original will be for sale. 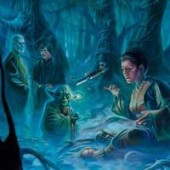 How to Break Creative Block Pt. 1

How to Break Creative Block Pt. 2